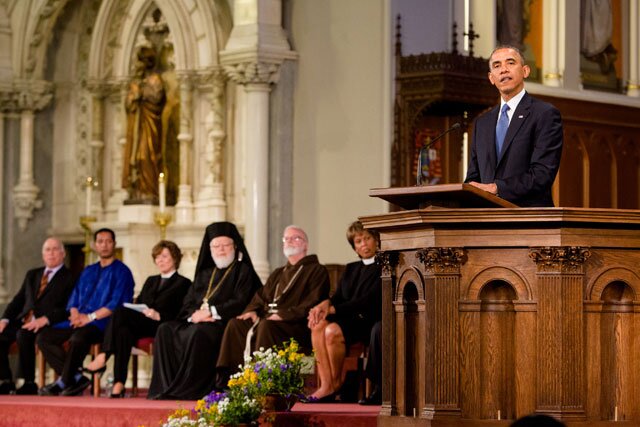 On Thursday, April 18, at the invitation of Governor Patrick of Massachusetts, His Eminence Metropolitan Methodios participated in the Interfaith prayer service for the Boston Marathon tragedy at the Cathedral of the Holy Cross in Boston. The service was broadcast live on most TV channels and online news outlets across the country.

Metropolitan Methodios has called upon all Greek Orthodox faithful throughout New England to join President Obama, Governor Patrick, Mayor Menino, religious leaders throughout the City of Boston and the people of the Commonwealth of Massachusetts to continue to pray for the healing of those injured, for their families, and especially for the eternal repose of the three innocent victims who lost their lives this past Monday. He has also urged our entire Greek American community to continue to do all we can in assisting in the relief efforts. Metropolitan Methodios, in cooperation with the IOCC (International Orthodox Christian Charities), has dispatched professionally trained Orthodox grief counselors to assist in the Mayor's emergency counseling centers throughout the city.

Below is the message delivered by His Eminence at the Interfaith prayer service:

This past Monday, a day rich with symbolism, an horrific act of terrorism wounded the heart and soul of our city and our nation. Thousands from throughout the world were in Boston as participants and spectators of the marathon which, as we all know, recalls the run of Phillipides from the ancient city of Marathon to Athens to announce the victory of Greece over the forces of an empire that devalued freedom, human dignity and democracy. The Boston marathon always coincides with Patriots Day, when we commemorate the battles of Lexington and Concord, the first of the American Revolution. Sadly it was on Patriot’s Day—when we celebrate the values of freedom and democracy, and the fiercely independent spirit of America—that evil reared its ugly head once again and countless innocent men, women and children fell victim to a senseless and unspeakable act of brutality. But we know that bombs of terrorism may kill and injure, but they cannot crush the American spirit.

Today we thank Cardinal O’Malley for opening the embrace of his Cathedral to all of us… to President Obama, to Governor Patrick, to Mayor Menino; to all who are in the public service; to the religious leaders of the Commonwealth; to every citizen, regardless of creed. We gather as a community—as brothers and sisters in the household of God—to bow our heads in solemn prayer for the repose of the souls of three innocent victims whose lives were violently taken, and for the countless victims who will bare painful wounds for the rest of their lives.

We come today to thank God for the police and firefighters, the National Guard, the doctors and nurses—for all who responded selflessly and courageously.

We pray that our gracious, loving, compassionate and merciful God, the Healer of our souls and bodies watch over us and comfort us in our hour of pain. May He who is the Prince of peace bring peace to our souls and to our community. And may almighty God bless America!

Photos courtesy of Gregory Tracy of the Pilot Catholic News »