Concert to Mark Metropolitan Methodios' 25th Anniversary to the Episcopacy 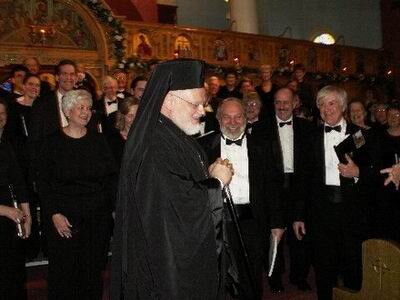 METROPOLITAN METHODIOS enjoyed the Rachmaninoff Festival Choir during a Concert at the St. Vasilios Parish in Peabody, MA on the occasionof the community's 100th Anniversary. Both performances at St. Vasilios were sellout events and many who attended them intend to enjoy the group and The St. John Chrysostom Liturgy at the Annunciation Cathedral of Boston on March 10 and 11.

The celebrated Rachmaninoff Festival Chorus, one of Maine’s largest and best known choral groups, will perform Rachmaninoff's Liturgy of St. John Chrysostom ,at the Annunciation Greek Orthodox Cathedral in Boston, MA on Saturday, March 10, 2007, 7:30 p.m. and on Sunday, March 11 at 3:00 p.m. The performances will be in honor of His Eminence Metropolitan Methodios of Boston who this year is celebrating 25 years as a Hierarch of the Church. He was elevated to the Episcopacy on July 18, 1982.

The Rachmaninoff Festival Chorus, numbering about 80 singers, is made up of the combined membership of Down East Singers and the Bowdoin College Chorus, both of which are conducted by Dr. Anthony Antolini, one of today’s leading specialists in the development of transliterations and “singing” translations of Russian choral music.

The Liturgy of St. John Chrusostom (or various sections of it) has been set by such outstanding Russian composers as Gretchaninov, Bakhemetev, Kastalsky, Archangelsky, and Tachsikovsky. Rachmaninoff’s own background was not strongly religious but we do know from his Recollections as told to Oscar von Riesemann that he was exposed to the music of the Orthodox Church by his grandmother, Sophia Alexandrovna Boutakova, when he was a boy of 11: “We spent hours standing in the beautiful St. Petersburg churches. Being only a young greenhorm I took less interest in God and religious worship than in the singing, which was o unrivaled beauty, especially in the cathedrals, where one frequently heard the best choirs in St. Petersburg. I usually took pains to find room underneath the gallery and never missed a single note.” Rachmaninoff composed his Liturgy of St. John Chrysostom in the month of July 1910. In a letter to his friend, he wrote, “I have been thinking about the Liturgy for a long time and for a long time I was striving to write it. I started work on it somehow by chance and then suddenly became fascinated with it. And then I finished it very quickly. Not for a long time have I written anything with such pleasure.” The work was published by Rachmaninoff’s regular publisher at the time in four separate part books. The first performance was on November 25, 1910 in Moscow.

The first American concert performance of a portion of Rachmaninoff’s Liturgy was given in new York on January 24, 1914 by the male choir of the Russian Cathedral of St. Nicholas at Symphony Hall under the direction of Ivan Gorokhov. The program was repeated a week later at Harvard University and featured six movements of Rachmaninoff’s liturgy and six of Tchaikovsky’s. A review in the Boston newspaper said: “Rachmaninoff excelled Tschaikovsky in fertility of technical means and in range and significance of invention, and with linear music of interwoven strands…the music…moved always in plastic line or in vividly superimposed phrases…”

Locating copies of the orginal 1910 Gutheil edition of Rachmaninoff’s Liturgy proved to be a challenge. After months of searching, a complete set of the original part books was found at St. Tikhon’s Monastery in South Canaan, PA. The Rev. Theodore Heckman, Director of Music at St. Tikhon’s very generously provided photocopies of all four part books. A microfilm of the full conductor’s score was found in the United States Library of Congress’ Rachmaninoff Archive with the generous assistance of Wayne Shirley. However, the microfilm was old and damaged in many places, rendering the notes illegible. Whenever such problems arose the part books provided indisputable evidence of the correct notes or rhythms.

The story of the reconstruction of Rachmaninoff’s 1910 masterpiece from the original edition, and subsequent performances of the Liturgy by American singers in Russia and Ukraine in 1988 in commemoration of the millennium of Russian Orthodoxy, has been told in a 58- minute television documentary for PBS entitled “Rediscovering Rachmaninoff” produced by KTEH television in San Jose, CA.

Anthony Antolini, conductor, was appointed Music Director of Down East Singers in 1991. A native New Yorker, he grauated from Bowdoin College and holds graduate degrees from Stanford University in Music and Slavid Studies. His specialty is Russian choral music. He is recognized as one of the leading specialists in the development and use of transliterations and "singing" translations of Russian choral music He joined the Bowdoin Music Department faculty in 1992 after teaching at Cabrillo College in Santa Cruz County, California.. He is editor of the Icons in Sound series at Paraclete Press and editor of a Russian choral series at E. C. Schirmer Music Publishing. He is the featured artist in "Rediscovering Rachmaninoff," the 1992 award-winning documentary written for public television for international distribution. In 1988 he was awarded a "distinguished alumni" medal by Moscow State University for his performances of Rachmaninoff's "Liturgy of St. John Chrysostom." A compact disc recording of this work featuring the Bowdoin Chorus has received an excellent review in the American Record Guide. In 1999 he was a featured speaker at the national convention of the American Choral Directors Association (ACDA) and in 2000 at the ACDA convention in Baltimore. He was elected by the Maine Chapter of ACDA as "Conductor of the Year" for the 1999-2000 season. Prof. Antolini is also conductor of the Down East Singers, a community chorus based in Camden, and serves as music director at the Episcopal Church of St. John Baptist in Thomaston, where he plays a 2003 Bedient tracker organ.

Tickets for the March 10 and 11 performances at the Annunciation Cathedral of Boston are $25 each and may be purchased from the Metropolis of Boston Office in Brookline. Receptions will follow each performance in the Cathedral Hall.