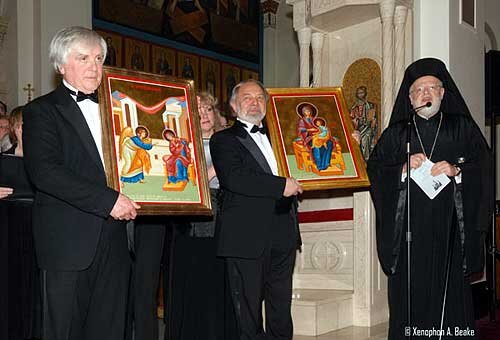 METROPOLITAN METHODIOS presented icons to Prof. Anthony Antolini who conducted the concert choirs and to Anatoli Panchoshny, the bass soloist who delighted the audience with his deep voice. The Metropolitan also presented dyptic icons to each member of the choir. A member of the music faculty at Bodowin College, Prof. Antolini published the first modern edition or Rachmaninoff’s Liturgy of St. John Chrysostom in 1988 and toured the East Coast of the United States and major cities of the former USSR with acclaimed performances of the work. Anatoli Panchoshny studied voice at Moscow’s Gnesin Institute. He received a laureate at a Russian national competition and performed as a vocal soloist with the Moscow Philharmonic throughout the Soviet Union and abroad, touring tomore than 20 countries worldwide.

BROOKLINE---Metropolitan Methodios and two large appreciative audiences from the Greek Orthodox Community of New England and the community-at-large were inspired and enthused during two performances of Rachmaninoff’s The Liturgy of St. John Chrysostom presented Saturday evening and Sunday afternoon by the Rachmaninoff Festival Choir and the Down East Singers & Bowdoin Chorus at the Annunciation Cathedral of Boston. The concerts were presented in honor of Metropolitan Methodios’ 25th Anniversary to the Episcopacy. Following the performances everyone enjoyed a reception in the Cathedral Hall. Guests had the opportunity to express their appreciation for Metropolitan Methodios’ visionary leadership and to offer their best wishes.

The Liturgy of St. John Chrysostom as a text is central to Orthodox worship and is the most frequently used. St. John Chrysostom (c347-407 A.D.) was born in Antioch and became a Priest in 386. In 398 he was made patriach of Constantinople where he quickly gained a reputation for his eloquence, his name in Greek and Russian is literally “Golden Mouth.” Rachmaninoff composed his Liturgy of St. John Chrysostom in July 1910. In a letter to his friend, Nikita Morozov, Rachmaninoff stated: “I have been thinking about the Liturgy for a long time and for a long time I was striving to write it. I started work on it somehow by chance and then suddenly became fascinated with it. And the I finished it very quickly. Not for a long time have I written anything with such pleasure.”

The first American concert performance of a portion of Rachmaninoff’s Liturgy was given in New York on January 24, 1914 by the male choir of the Russian Cathedral of St. Nicholas at Symphony Hall. The program was repeated a week later at Harvard University and featured six movements of Rachmaninoff’s liturgy and six of Tchaikovsky’s. 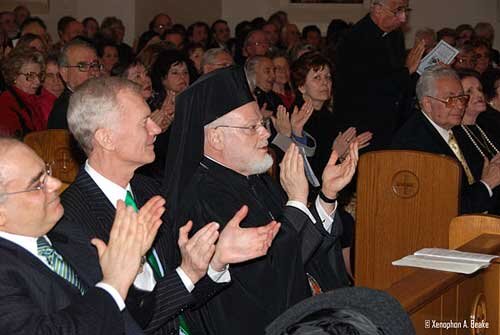