Metropolitan Methodios' Remarks on the Occasion of March 25

We pause today in this beautiful State House in Rhode Island as we do every year to reflect upon the Feast of the Annunciation of the Virgin Mary and the anniversary of the rebirth of the Greek Nation--- the rebirth of democracy in the land where democracy was conceived. We pause to honor those heroes and heroines who sacrificed their lives so that their children could live in a democratic society where their human dignity and right to equality could be respected.

We mystically stand before the icon of the Annunciation to recall the heroic annunciation of the Greek people voiced by Bishop Germanos of Patra. It was he who raised the banner bearing the motto “liberty or death”, a banner which became the honored symbol of the revolution.

The revolutionaries knew well that they were vastly outnumbered. However, they firmly believed that the reality in which they lived would be reversed by Divine intervention---by powers beyond human measure. They were imbued by the hymn they chanted, referring to the Annunciation of the Virgin, “When God so wishes said the bodiless Angel, the order of nature is overcome, what is beyond man comes to pass.” (Vesper Service)

The Revolution of 1821 was, in essence and in fact, a miracle---a miracle of Faith in Him Who said, “All things are possible to those who have faith” (Mt. 9,23). The Revolution of 1821 was a belief in what is treasured in the First Epistle of St. John, “this is how we win the victory over the world---with our faith” (1 John, 5,4). Emblazoned by that faith, the Greek revolutionaries rose against a powerful and mighty tyrant that enslaved them for more than 400 years. The yoke of tyranny crumbled under the overpowering strength of their faith.

This year, our March 25 celebrations have been dedicated to our brethren who live in Turkey and who yearn for their own annunciation---the good news that the Patriarchal theological School located on the Island of Halki will be re-opened by the Turkish government.

For more than 127 years, Halki nurtured men to serve the Church throughout the world as clergymen, educators and scholars. It was closed in 1971 by Turkish authorities under a law requiring that higher education in religion and military training be controlled by the State of Turkey. This theological school is the only such seminary preparing clergy for service in the Church in all of Turkey. It treasures one of the richest libraries in the world in rare and precious works. Its closing of in 1971 deprived the Ecumenical

Patriarchate the means to educate its clergy, a right enjoyed by Turkish citizens of the Muslim Faith. This is a clear injustice and a complete disregard of human freedom and religious tolerance. 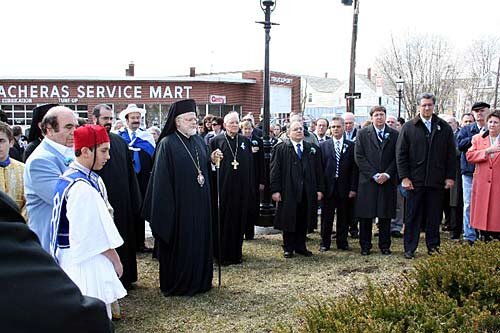