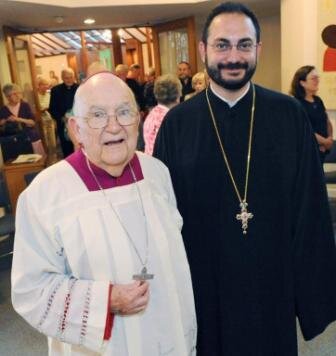 By Vito Nicastro, Ph.D., Office for Ecumenical and Interreligious Affairs of the Roman Catholic Archdiocese of Boston

On June 29 The Roman Catholic Archdiocese of Boston shared the Feast of Saints Peter and Paul with a delegation from the Greek Orthodox Diocese of Boston.    Vespers started at 7 PM at Saint John Chrysostom Parish, 4750 Washington St, West Roxbury.   A good crowd of about eighty clergy and faithful joined in prayer and celebration.

In Rome on June 29 His Holiness Pope Benedict XVI also presided at the Feast of Sts. Peter and Paul, Patron Saints of Rome.   Since the epochal improvement between Orthodox and Catholics starting at Vatican II, it has become a tradition for the Ecumenical Patriarch of Constantinople to send a delegation to Rome to share the feast of Rome’s Patron Saints.   St. Andrew is the Patron for the Greek Orthodox Mother Church of Constantinople and therefore on November 29, at the Feast of St. Andrew, Pope Benedict XVI will send a delegation to the Greek Orthodox in Constantinople.

And since the joint pilgrimage of Bostonian Catholics and Orthodox in 1996 to Rome and Constantinople, with the follow-up Pilgrimage in 2007, it has become tradition here as well for the Archdiocese to invite the Eastern Orthodox to join us for the Feast of Sts. Peter and Paul.   This year His Eminence Methodios, Metropolitan of the Greek Orthodox Diocese of Boston and All New England, sent his Chancellor, The Reverend Theodore Barbas, to represent him at our Festal Vespers on June 29.   And on November 29, at the Feast of St. Andrew, His Eminence Cardinal Seàn is planning to reciprocate by leading a group of Catholics to the Orthodox’ celebration of St. Andrew.

The local celebration in Boston has always been important as a way of bringing to life the examples of the hierarchs and beginning to make reality of our hope for unity.    This year is special in many respects.   June 28, 2009 marks the close of the worldwide Pauline year. To give a sense of how important Christian unity is, the Catholic Church gave two themes to the Pauline Year: Understanding St. Paul’s Writings, and Christian Unity. Pope Benedict XVI has said the joint activities were the best way to honor St. Paul, who urged Christians "'to preserve the unity of the spirit through the bond of peace,' teaching us that there is 'only one body and one spirit.'"  For more information about the meetings in Rome and the worldwide Catholic-Orthodox Dialogue, see

Of all the Ecumenical events of the Pauline Year, the most epochal are the presence of the Patriarch of Constantinople at the Synod of Rome on the Word of God – something unheard-of for centuries – and the presence of a delegation from Rome at the Synaxis (a special meeting) of the Patriarchs of the Eastern Orthodox Churches in Constantinople. Just as the Orthodox and Catholic Churches worldwide are dedicating themselves anew to restore full communion, the Orthodox and Catholics of Boston have recently returned from a Joint Pilgrimage to Rome, Constantinople, and St. Petersburg which rededicated our particular Churches to continuing to build the outstanding relationship we steward.

The Holy Father has committed himself to the effort to build Christian unity, which was one of the “principle concerns” for which the Second Vatican Council was convened.   Our Lord, on the last night before his victorious self-offering on the cross, asked for all of his followers “that they may be one… that the world might believe” (John 17:21ff).   Orthodox and Catholics were one Church for most of the first thousand years after Jesus.  Both of us are determined to pray and work in order to be one again.

Each and every Catholic has a role to play, including praying for this sacred goal.   Vespers on June 29 affords a particularly apt occasion for that.  All are encouraged to put it on their calendar for this year and every year.