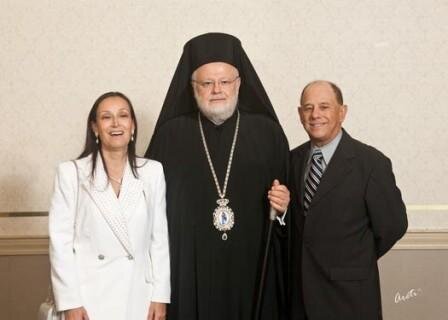 "Only by participating can we ensure the health, dignity, freedom and creativity of our society" is the philosophy of Christos and Mary Papoutsy. The faith and respect Mary and Christos Papoutsy have for Orthodoxy and Hellenism has been demonstrated throughout their lives not only in America but also in the land of their roots, Greece. The Archdiocese, the Metropolis of Boston, Parishes, as well as universities in the granite state where they make their home have been the beneficiaries of their love for their heritage which they consistently promote with enthusiasm. The latest endeavor they have undertaken is A Celebration of Greek Music, a premier concert which will feature an 100-member orchestra of talented musicians from throughout the country, and a Chorale Group which will live up to its name "Kallifonoi". It consists of many of the dedicated choir members of parishes throughout New England.

To be held at the Sanders Theatre at Harvard University in Cambridge on Saturday, September 21, this star studded event which is celebrating Metropolitan Methodios's 25th Anniversary of Enthronement as Bishop of Boston, will also feature Mezzo Soprano Penelope Bitzas, California Opera Historian and dramatic soprano Ioanna Sfekas-Karvelas who will come from Greece, mezzo soprano Stephanie tia Kacoyanis, Katerina Geomelos who has recorded CDs released in the United States and Greece, Georgia Theo (Kokoras) a talented musician from Pennsylvania with an extensive repertoire of songs of Greece and Asia Minor.

Under the leadership of His Eminence Metropolitan Methodios, the participation of the faithful in the Metropolis of Boston ministries and programs has resulted in many accomplishments. The Metropolis Center in Brookline, the Philoxenia House, the St. Methodios Faith & Heritage Center, the Youth Ministry Programs, the Marriage Preparation Program, the Religious and Greek Education Programs, as well as the Hospital, Nursing Home and Radio Ministries are the result of visionary leadership, enthusiasm and participation. The success of the November 21 Concert will benefit these programs and ministries which continue to be improved and expanded.

The entire program consists of songs which those who have seen it say, "these are my kind of Greek songs". It can be viewed on the Metropolis website, www.boston.goarch.org.

Some Parishes are hiring buses so that their stewards will travel together and enjoy this wonderful evening of Greek music, fellowship, and participation! The event is expected to be a sell-out.