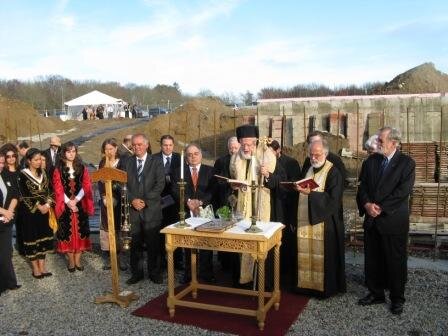 His Eminence Metropolitan Methodios presided at the laying of the cornerstone of the Rodos  Building of Hellenic Studies, the Ayios Loukas Chapel and the Classical Open Air Theater at the University of Rhode Island on Sunday, November 15.  The project is under the auspices of the Rhode Island Chapter of the Hellenic Society Paideia whose president is Prof. Ilias Tomazos, a native of the beautiful and historic Aegean island of Rhodes.  Prof. Tomazos and his committee have dedicated their lives to the completion of this project which will continue the offering and enhancement of the Hellenic Studies Program at the university.

Among those present at the ceremonies were the Consul General of Greece in Boston, Constantine Orphanides, the president emeritus of the University of Rhode Island Robert L. Carothers who enthusiastically supported this project during his tenure, and Dr. Nicholas G. Loutsion of Canonsburg, PA who is president of his local chapter of the Rhodian Society.  Also present were all the clergy of the parishes in Rhode Island---Rev. George Economou, Rev. Andrew George, Rev. Philip Zymaris---the Rev. Evangelos Georgiades, Pastor of the St. Demetrios Parish in Fall River, who is a Rhode Island resident, State Rep. Leonidas Raptakis, and many supporters of this project.

Despina Metakos Harris was the toastmaster of the program during which all speakers endorsed the project with pride and encouraged support of the fundraising campaign which has been jointly undertaken by the RI Paideia Chapter, the Pan-Rhodian Society of America “Apollon”, the Greek American Organizations in Rhode Island and New England, the Hellenic American National Council and the Council of Hellenes Abroad (SAE).  Metropolitan Methodios urged all to financially support this cultural undertaking and made a personal pledge to the campaign. 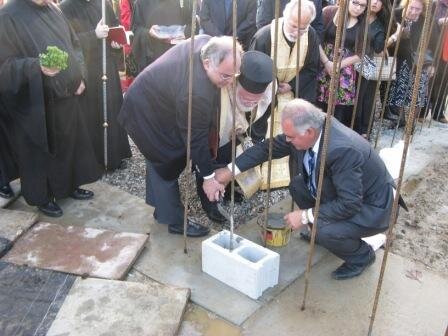 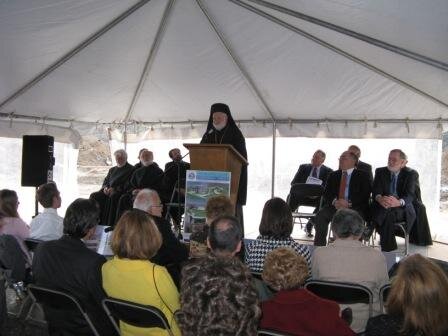