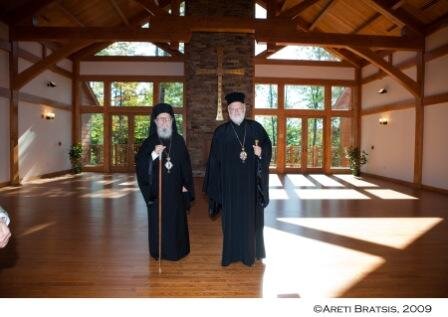 His Eminence Metropolitan Methodios announced that the St. George Cathedral in Manchester, NH approved a major donation to the Retreat House at the St. Methodios Faith & Heritage Center in Contoocook, NH. Fr. Andrew Mahalares, the Dean of the Cathedral, informed Metropolitan Methodios this week, "It is with extreme humility that I announce that the Board of Directors of the Saint George Greek Orthodox Cathedral in Manchester, New Hampshire, at their regular monthly meeting on December 14, 2009, approved the donation of $250,000 to name the Great Room at the Retreat House of the Faith & Heritage Center in Contoocook." Father Mahalares went on to say, "The decision to make this contribution was the result of their belief in the valuable ministry provided by Metropolitan Methodios through the many ministries he has implemented to educate and spiritually edify the faithful in the Metropolis of Boston since his enthronement as the Bishop of Boston as well as their belief that they must continue to lead by example as the Greek Orthodox Cathedral of New Hampshire."
Said Metropolitan Methodios: "I am truly grateful to the St. George Cathedral stewards for this major donation to our Retreat House. It is very appropriate that the Great Room of this facility is underwritten by the Greek Orthodox Cathedral of the granite state where it is located. I highly commend Father Andrew, the leadership of the Cathedral, and all the stewards for their visionary faith and dedication to Orthodoxy and Hellenism. Their magnanimous donation will be appreciated not just by today's faithful, but by the generations to come."
The Retreat House was completed in September 2009. Door Opening Ceremonies were held on September 26 attended by Archbishop Demetrios of America, New Hampshire Governor John Lynch, and more than 1300 faithful from throughout New England. The 38-room facility on the shores of one of the lakes on the 300-acre property has a beautiful Great Room as its focal point. The three story edifice also contains a library, named the Archbishop Demetrios Library in honor of his 10th anniversary as Archbishop of America, as well as conference rooms, a kitchen and other facilities.
The Retreat House will be used to expand the Metropolis ministries to faithful of all ages. In the picturesque woods of the granite state, this magnificent facility offers a tranquil environment for retreats, meetings and gatherings.