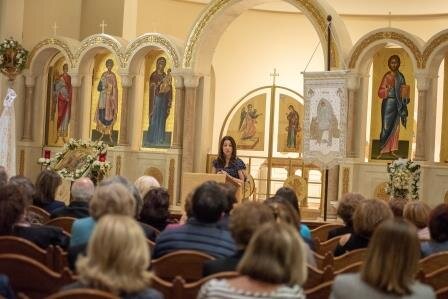 On Thursday, April 26, 2018, the Metropolis of Boston Philoptochos welcomed award winning author Yvette Manessis Corporon who spoke about her recent book, Something Beautiful Happened: A Story of Survival and Courage in the Face of Evil.  Before a crowd of over 250 people, including His Eminence Metropolitan Methodios and representatives from the Greek Consulate of Boston, Yvette discussed the fascinating story of her grandmother who helped hide a Jewish family on a Greek Island during World War II.  In the beautifully decorated setting of St. Demetrios Church Weston, guests enjoyed an evening of wine, food, shopping, book signing, and sociability.

Proceeds from the event, held in memory of Fotini Tournas, beloved sister of His Eminence Metropolitan Methodios and life-long supporter of Philoptochos, will benefit the Metropolis of Boston Philoptochos ministries.

At the close of the program, Metropolis Philoptochos President Elaine Zetes thanked His Eminence Metropolitan Methodios, Father Nicholas Krommydas and the St. Demetrios Parish, Yvette, the MOB Philoptochos supporters, and Chairwomen Athena Kalyvas and Theresa Nibi, Treasurer Irene Stefanakos and the Philoptochos Board, all of whom worked tirelessly to create an evening that was truly “Something Beautiful”. 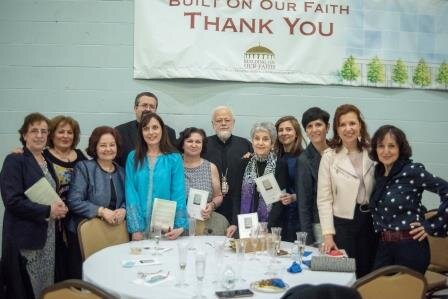 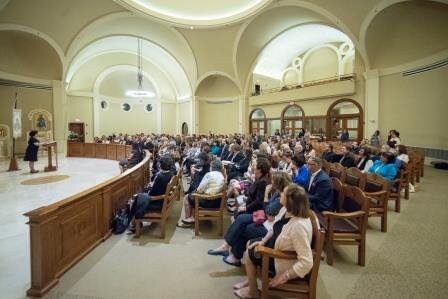