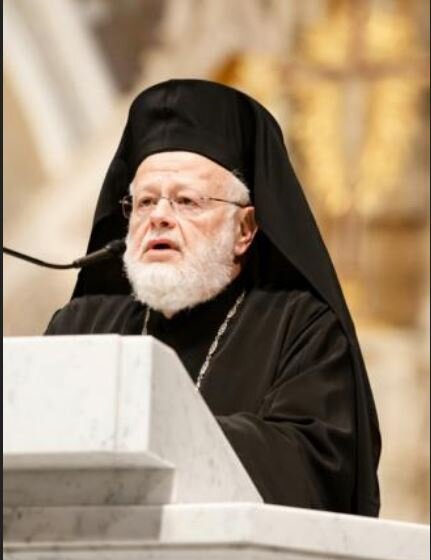 BOSTON -- Priests, deacons, seminarians, religious, and laypeople gathered at the newly renovated Cathedral of the Holy Cross on April 16 for the annual Chrism Mass. The Chrism Mass serves as a symbol of unity in dioceses throughout the Catholic world during Holy Week each year, as the local bishop blesses the sacred oils used to administer sacraments for the coming year -- the oil of catechumens, the oil of the infirm, and the sacred chrism.During the Mass, also seen as an opportunity to celebrate priestly fraternity, priests renewed their vows and afterwards attended a luncheon with the cardinal and received oils for their parishes.At the opening of the Mass, Cardinal Seán O'Malley acknowledged the fire that had devastated the Cathedral of Notre Dame the previous day and encouraged prayers for the people of Paris.Greek Orthodox Metropolitan Methodios was present for the Mass and, as has been the tradition in recent years, was invited by the cardinal to give remarks before the Mass.He asked Cardinal O'Malley to convey "the love and the concern and the prayers of all the Orthodox community in New England" to the Archbishop of Paris."I pray that the cross of Christ, that beautiful cross which we all noticed in the Cathedral of Notre Dame, will inspire the archbishop and priests and the laymen to rebuild that beautiful and historic cathedral, so that millions and millions of worshipers may go and be inspired by the Mother of God, who gave birth to the Savior of the World," Metropolitan Methodios said.In his homily, Cardinal O'Malley suggested that Jesus' "job description for the priesthood" could be drawn from the Gospel accounts of the Last Supper."The shorthand version of such a description might read: 'Wanted, friends and foot washers.' Certainly, Jesus makes it very clear that he is not interested in hirelings, administrators or efficient functionaries," Cardinal O'Malley said.He said that the account of the Last Supper in the synoptic Gospels describes the Liturgy of the Eucharist, while that found in John's Gospel is like the Liturgy of the Word."Together these Gospels teach us so much about our vocation," Cardinal O'Malley said.He pointed out the significance of Jesus washing the feet of his apostles, including Judas, who would betray him; Peter, who would deny him; and Thomas, who would doubt him."The faces in da Vinci's Last Supper, filled with fear, indignation and grief, are the faces of our Catholic people today, who are scandalized and disappointed with leadership in the Church. It is therefore very significant that the authors of the gospels did not whitewash that reality, did not Photoshop out Judas and Peter. It's all part of the lesson that Jesus wants to teach us. Jesus wants us to love the Church in spite of the sinfulness and weakness of our leaders," Cardinal O'Malley said.He said Judas demonstrates "the perennial danger that even those who have once been enlightened" can still "perish spiritually.""The story of Judas stands as a stark warning to all of us to be vigilant so as not to betray our friendship with Christ and place our lives in the grip of another power," Cardinal O'Malley said.He spoke of Jesus' commandment, in what the cardinal called "the first ordination homily," to love one another."Obedience and love lead us to friendship with Christ. The promises we renew today are our attempt to shape our lives by this loving obedience," he said."Jesus loves his Church as it really is, with all her blemishes. He washes the feet of the betrayer and the denier. The Divine Physician has come for the sick, the lost sheep, the sinner. We can be disappointed, incensed, turned off by sin in the Church, but we must never stop loving the Church and working to reform her. Like first responders, we priests are needed to run into the burning building, not to run away from it," Cardinal O'Malley said.He said priests must "accept that the cross is part of our priestly identity and foot washing is an essential part of the job description."Cardinal O'Malley also spoke of the importance of friendship in the life of a priest."We can survive as priests only if we embrace a life of friendship; friendship with Christ, friendship with our fellow priests, and friendship with the people we serve," he said.He compared the priests' renewal of their vows at the Chrism Mass to Peter's threefold profession at what Cardinal O'Malley called "the Last Breakfast," when the risen Jesus prepares breakfast for his disciples."Today, Christ and the Body of Christ, His Church, are asking us priests three questions, which could be stated simply: 'Do you love me? Are you my friend? Will you be a foot washer?' If we say yes with all our heart, Jesus will recommission us: 'Feed my lambs. Feed my sheep,'" Cardinal O'Malley said.