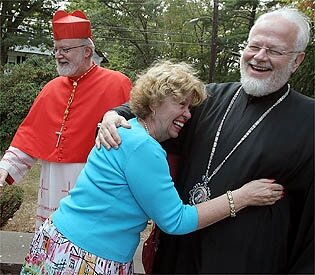 Orthodox and Roman Catholic pilgrims, seeking to end a centuries-old schism between the Christian faiths, are embarking on a 10-day journey abroad led by Cardinal Sean P. O'Malley and His Eminence Metropolitan Methodios.

"We pray for the unity of the holy church of God. The schism and separation is a sin. If Christianity were a united church, imagine how much more impact it would have in the world," said Methodios, who hosted a pilgrim prayer service yesterday with O'Malley at the Greek Orthodox Metropolis of Boston.

This is the second time in11 years that members of Boston's Orthodox and Catholic communities have taken a pilgrimage together. Roman and Eastern Orthodox Catholics split in 1054 because of a dispute concerning the pope's primacy.

The journey, which begins Sunday, will take more than 100 pilgrims to Rome, Turkey and St. Petersburg, Russia.

"We're going to be celebrating the Eucharist at the tomb of the Apostle Paul and venerating the chains he was bound with when he was led away. I don't think we can share that experience and not be changed," said Vito Nicastro, associate director of the Office for Ecumenical and Interreligious Affairs at the Boston archdiocese.

The Mass at St. Paul's burial place is part of the pilgrimage'sVatican itinerary, which will also include a general audience with Pope Benedict XVI.

The shuttered Halki seminary in Turkey is another important stop for the pilgrimage. The theology school where about 90 percent of all Orthodox clergy trained was closed by the Turkish government in 1971.

"It's the lifeline of the church," Methodios said.