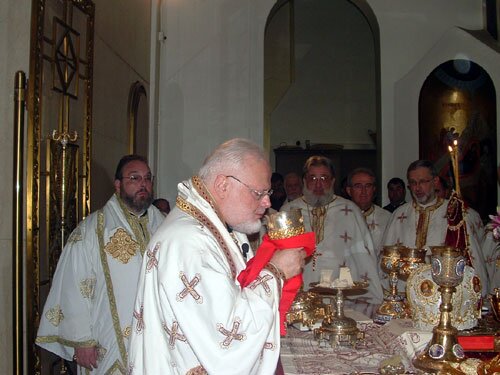 It was indeed a joyous family event, an inspiring celebration. They came from throughout New England and every Parish in the Metropolis. Clergy and laity, faithful of all ages and all walks of life filled the Annunciation Cathedral of Boston on Wednesday, July 18, to celebrate the 25th Anniversary of the ordination of Metropolitan Methodios as a Hierarch of the Church. He was ordained to the Episcopate on July 18, 1982.

During the Divine Liturgy where Metropolitan Methodios presided together with Metropolitan Evangelos of New Jersey, 12 clergymen participated including the Rev. George Daskalakis, Dean of the Cathedral who was a classmate and roommate of Metropolitan Methodios when they were students at the Seminary, and the Rev. Thomas Chininis, President of the New England Clergy Brotherhood and Pastor of St. Philip’s Church in Nashua, NH.

The campers and staff from the St. Methodios Faith & Heritage Center in Contoocook, NH traveled to Boston by buses to participate in this historic event in the life of Metropolitan Methodios and the Metropolis of Boston.

The Spiritual Leader of the Greek Orthodox Family of New England remembered Archbishop Iakovos during the Divine Liturgy and in his remarks following the Service. Referring to the beloved Hierarch of blessed memory who served as Dean of the Boston Cathedral and then led the Archdiocese for many years, he said, “I believe I am the only Hierarch who was ordained to all three ranks of the Priesthood by Archbishop Iakovos. I consider that fact a great honor.”

Metropolitan Methodios served as an Archdeacon to Archbishop Iakovos for six and one half years. When he was ordained to the Holy Priesthood, he was assigned to the St. Spyridon Parish in Washington Heights, New York City, where he served until the Ecumenical Patriarchate elected him an auxiliary Bishop in 1982. Two years later, he was elected Bishop of Boston and assumed his pastorate on April 8, 1984, enthroned by Archbishop Iakovos in the Annunciation Cathedral of Boston.

Following the Divine Liturgy, the congregation attended a reception in the Cathedral Hall where they had the opportunity to greet and congratulate Metropolitan Methodios on the auspicious occasion. The campers from the St. Methodios Faith & Heritage Center enjoyed pizza, salad and refreshments prior to departing for Contoocook to resume the summer camp activities. Before they left the Cathedral, Metropolitan Methodios spoke to the campers in the Cathedral’s lower hall. He has been visiting the camp frequently, talking with the campers and staff, enjoying a baseball game, and constantly looking for ways to create even more programs at the Faith & Heritage Center. Metropolitan Methodios and all the faithful in New England are looking forward to the upcoming construction of the Retreat House by the lakeside of the 200- acre Faith & Heritage Center. Also under construction soon will be a special cabin for Children with Special needs, made possible through a generous grant from the Stavros Niarchos Foundation.