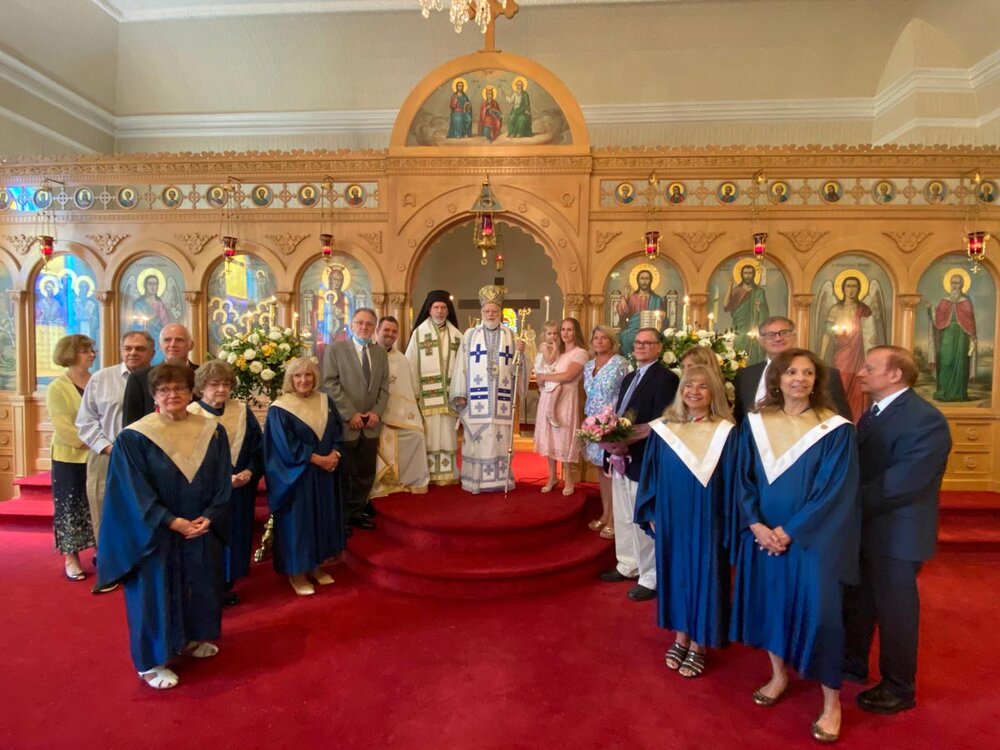 for the Sunday of the Blind Man

Your Eminence Metropolitan Methodios of Boston,

St. John the Theologian, the Evangelist of love, offers as a firsthand account, as an eyewitness and earwitness, of the events surrounding Divine Oikonomia/Dispensation, considering that he himself was present together with Christ’s other disciples and a multitude of people.

Our Lord was at the Treasury, located inside the portico of the Temple, where he was teaching the people. He was engaged in a long discussion with the Jews regarding the true God. Many believed His teachings, but the Scribes and Pharisees, boasting that they were descendants of Abraham, accused Him of being a Samaritan and of being possessed by a demon. Finally, when he told them that He predated Abraham, they took up rocks to stone Him.

Leaving behind His enemies to be consumed by their maniacal hatred, he left the Holy Temple and, passing through the multitudes that had gathered, due to the fact that it was the Sabbath, a day of rest, he saw a blind beggar among them, who would tell the passers-by of the misfortune that had befallen him. The heart-wrenching spectacle of the blind man drew the sympathy of the Lord’s disciples, and since they could not comprehend the reason why an innocent creature was condemned to lose his sight “from birth,” they asked Jesus: “Rabbi, who sinned, this man or his parents, that he was born blind?”

Through His response, our Lord enlightened His perplexed disciples, explaining to them that neither he nor his parents sinned, but rather, he found himself in this state so that the greatness of God might be revealed through the healing of his blindness.

The miracle of the healing of the man who was born blind poses two problems of fundamental importance to the entirety of Christological discourse. The first is the trial undergone by an innocent man and the second is human sight. The Christian outlook on sickness is that it has its roots in sin. But what sin could a man who was born blind have committed? If we attempt to examine this using common logic, this question will remain unanswered. The old mystics of the Judaic Law provided a reasonable explanation for the challenges facing an innocent man – the sins of his forefathers.

However, in this particular passage, Jesus definitively clarifies that a sick person does not pay the price for anyone’s sins. In fact, He reveals the innocent blind man to be an instrument of Divine dispensation, destined to show the people the marvelous workings of the Creator, to clarify for them precisely what sight is and is not, and essentially, to elevate this miracle to the highest level of judgement, which divides people between those who have their eyes open, and those who keep them shut.

The logic of sophistry continuously looks to society and makes reference to the most striking of contrasts. It cites the fact that there are righteous people who undergo physical and spiritual trials, and there are unjust people, who enjoy all the pleasures of life and move on from one triumph to the next.

However, if we carefully study both the Old and New Testament, since the latter completes the former, we will have no difficulty in arriving at the correct interpretation. The scourges received by man, whether spiritual or physical, are not a punishment, as defined by secular justice, but rather, a trial. Let us be mindful that virtue is “made complete” in weakness, and faith is “made complete” in the face of trials.

When Christ clarifies that the man who was born blind is not paying for his sins or those of his forefathers, he doesn’t mean that the blind man is sinless. He means precisely the opposite. He means that there is no one who is without sin, and that a person, from the moment of his conception, carries with him the tragic inheritance bequeathed to him from the Fall of Adam and Eve. Otherwise, we would have to acknowledge that the weight of original sin does not follow on a person from the moment of his conception, but is placed on his shoulders at some undetermined point in his life.

But the latter interpretation is wrong. The infants murdered by Herod, the man who was born blind, the deeply tragic figure of Job, and Abraham, who was tested severely, all bear the weight of original sin equally and similarly, regardless of whether this weight become more difficult to bear through the trespassing and breaking of the commandments of the law. We are all born “blind,” inasmuch as we do not know what our path on the earth will be. Only the joyful acceptance of the incarnate Logos can heal us from the “blindness” that accompanies us from birth.

The Pharisees, who questioned the man who was born blind, are no less blind than him. In fact, they are more blind than him, because although he sees things in their essential picture and proportions, they insist on ignoring the true fact that a man born blind was healed and focus only on examining whether the man who healed him could perform such a miracle. Wearing their blinders and ensuring that their pronouncement would be in keeping with the decision of the Sanhedrin or local tribunal of elders, they declare the formerly blind man to be a persona non grata, expel him from the synagogue, and close their eyes to the miracle that took place.

In the Gospel of Matthew, a reality and its prospects are described. Specifically, it is written that “the people who sat in darkness have seen a great light.” Truly, prior to Christ’s arrival in the world, humanity found itself mired in spiritual darkness, however, after His arrival, it saw the true light. In today’s meeting between the Creator and the man who was born blind, Christ reveals that He is the light of the world, and that whoever follows Him shall not walk in darkness, but shall attract the light of life.

Blessed is the blind man! For God knows how to extract the good even from the bad. The Pharisees expelled him, but Christ found him. The blind man was joyful because the people persecuted him on account of God’s name! The Lord revealed that He was his healer, and that it was the Son of God who spoke with him, and the blind man believed in Him, worshipped him, and was saved.

And so, behold. Here is the reason for our personal joy: our devotion to God’s will and our submission to His commandments. Let us open our hearts to Him “who tests hearts and minds,” and then our union with Him will open the prospect to our eternal salvation, which I pray God deems us all worthy to receive.

Although our world has been undergoing the tribulations of the coronavirus pandemic over the past two years, although our life has changed and our way of life has been upended, although the fear of illness and the threat of death torments our existence and creates a cloud of darkness, in the face of this situation, let us choose the light, which is Christ Himself, and then we will have the certainty of the young man from today’s Gospel reading.

At this point, I consider it my duty to thank your beloved Shepherd/Poimenarchis, His Eminence Metropolitan Methodios of Boston, for the 16 years of tutelage he offered me by his side, and for the hospitality they have shown me today in the parish of Fr. Christopher & Fr. Peter, their families and the parish of Ipswich. Thank you.