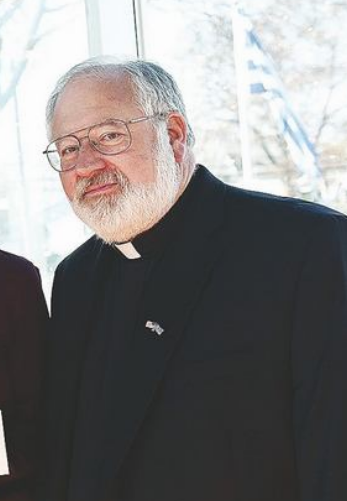 On April 1, 2015 a new chapter in the 112 year history of the Saint George Greek Orthodox Cathedral began when the Very Rev. Archimandrite Agathonikos M. Wilson (Father Mike) became the new Cathedral Dean.  Prior to joining us Father was the presiding priest at the Holy Trinity Greek Orthodox Church in Concord, NH for past seven years and is well known by many parish families here in Manchester.

Fr. Wilson was born and raised in upstate New York in the small community of Johnstown. The family arrived in Johnstown just after 1900 as his great uncle arrived in this country.
This was the beginning of the Greeks named Wilson in upstate New York. Father’s great uncle, Panagiotis Dedousis, was from Mega Kapsi in Central Greece. At some point in Panagioti’s journey he met a family from England whose name was Wilson, and they became good friends. At that time in American history, the Greeks and other Southern Europeans needed
a sponsor to come to America. The Northern Europeans could come with just a visitor’s visa. Theo Panagioti therefore became Peter Wilson, borrowed his friend’s visa and found himself in America, settling in Johnstown, New York.

Soon afterwards other family members came here, including Father’s Pappou, Harilaos Dedousis, who now changed his name to Harry Wilson and the new family name was
even more permanent. Pappou Harry married Yiayia Nerantzoula Krikellas (who was from Istaea, Evia) in upstate New York and raised their family of six children there. Their second child was born in 1924 and was named George.

On Father’s maternal side, Pappou Michael  Lazarides left his family’s home in Usak, Asia Minor in 1916. He met Triantafilia Xenakis (who was from Valia, also in Asia Minor) either in Athens or on the boat to America. They were married and settled in Woburn, MA where Pappou owned a tailor shop. The family name was changed to Jefferson and they had four children. Their second child was born in 1925 and was named Kleoniki.

Fr. Agathonikos is the third of five children born to George Wilson and Kleoniki Jefferson, who were married in 1952, after being introduced by family friend, Mr. Charles Antonopoulos of Lowell, MA. His dad owned a small commercial printing business where all the Wilson children
learned at a young age the work ethic that made the Greeks and many other Europeans successful in this country. His mom worked as bookkeeper and office manager for a local
insurance premium finance agency.

Father has two brothers and two sisters. His older brother Harry and sister-in-law Annette live just outside of Albany, NY and have three daughters and three grandchildren. His older sister Nancy Chadis and brother-in-law Steve live in Tewksbury, MA and have one daughter and one son. His younger brother Father George and sister-in-law Presbytera Harriet live in New  Orleans, LA and have two daughters. Fr. George is the Dean of the Holy Trinity Greek Orthodox
Cathedral in New Orleans, LA. His younger sister Phyllis Donahoe and brother-in-law Paul live in Braintree, MA and have one son.

After graduating from the Johnstown High School in 1975 he attended and graduated from Western New England College in Springfield, MA with a Bachelor of Science degree in Business Administration in 1979. After college, Father returned to upstate New York to help his parents as his father had just been diagnosed with cancer. He first worked as an assistant controller for a local company and then as a legislative assistant for a member of the New York State Senate in Albany. His father fell asleep in the Lord in 1984 after a lengthy battle with cancer. Within months, his mother was now diagnosed with cancer and she bravely battled the disease for about four years, falling asleep in the Lord in 1988.

The Wilson family worshipped at the Saint George Greek Orthodox Church in Schenectady, NY and in his earlier years Father taught seventh and eighth grade in the church school, co-chaired the annual festival, and served on the parish council, including two years as parish council president. It was at Saint George in Schenectady that he was spiritually inspired by two former priests of the community, Fr. James Christon, of blessed memory and Fr. Philip Koutoufas, of blessed memory, who later became Bishop Philip of Atlanta. His calling to serve the Lord began that early.

Moving to the Boston area over twenty-five years ago, Father worked in the printing management field for several local printing and reprographics companies. He was a member
of the Annunciation Greek Orthodox Church in Woburn, MA where he taught seventh grade in the church school, served as the altar boy director, chanted for eleven years, and served on the parish council, including five years as parish council treasurer.

Fr. Wilson studied at our Holy Cross Seminary in Brookline, MA from September 2001 to May 2005, beginning study at the age of forty-four. At the beginning of his senior year he was ordained to the Holy Deaconate on August 22, 2004 by His Eminence Metropolitan Methodios of Boston and was given the name Agathonikos, in order to honor the memory of the martyr whose feast day was celebrated on that day. The tradition in the Orthodox Church is that a celibate candidate for ordination receives a new name by his ordaining Hierarch. His given name was Michael. He was ordained to the Holy Priesthood on May 15, 2005 at the Annunciation Cathedral in Boston, again by His Eminence Metropolitan Methodios of Boston. Father graduated from Seminary a week later and received a Masters of Divinity degree.

Upon graduation in May, Fr. Wilson was assigned to serve at the Transfiguration Greek Orthodox Church in Lowell, MA as the Interim Pastor while the priest of the community was
recovering from a hip injury. On September 1, 2005 he was assigned by His Eminence Metropolitan Methodios of Boston to be the Presiding Priest of the Saint Nicholas Greek
Orthodox Church in Lexington, MA. On September 1, 2008, His Eminence Metropolitan Methodios assigned Fr. Wilson to serve as the Presiding Priest of the Holy Trinity Greek Orthodox Church in Concord, NH. He was elevated to the ecclesiastical rank of Archimandrite on January 10, 2010.

Father serves as the Metropolis Chairman of the Saint John Chrysostom Oratorical Festival, a ministry of the Greek Orthodox Archdiocese of America Department of Religious Education.
In June 2008, Father was both honored and blessed to also serve as the Host Chairman of the 2008 Archdiocesan National Oratorical Festival Finals, which was hosted by the Metropolis of Boston that year.

Father Mike’s approach is one of involvement and he enjoys working with the many ministries and organizations at Saint George and strives to expand the ministries and outreach of the church. His
door will always be open to you and wants to encourage you to call on him whenever you need regardless of the time of day or night.

Father also keeps a vigorous schedule of reaching out to you in your homes as well. It is his hope and prayer that together we might all grow  spiritually and come to a deeper love and understanding of Our Awesome God; Father, Son, and Holy Spirit.