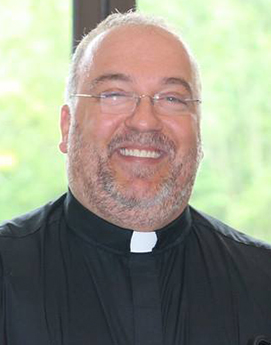 Rev. Fr. Dionysios Koulianos was born on and grew up in Katerini, Greece on December 6, 1974, where he received his primary and secondary education. In March 1998 he relocated to the United States to the city of Fort Wayne, Indiana. He married his Presbytera, Maria (Makridakis), native of this same city, on July 11, 1998 in Katerini, Greece. In these first years, he worked full time in the production division of an aluminum foundry that produced products for General Motors while learning the English language and attending classes at ITT Technical Institute where he graduated in 2002 receiving an Associate of Applied Science in Computer Network System Technology.

For the next eight years he worked as a Systems Analyst at Professional Federal Credit Union all the while being an active steward, choir member, chanter and parish council representative at Holy Trinity Greek Orthodox Church of the same city. In 2010, he felt called to follow Christ, and with the blessing of the Metropolitan, he and his wife, came to Brookline, MA, where they both attended classes at Holy Cross Greek Orthodox School of Theology. He received a Bachelor of Arts from Hellenic College (2012) in Religious Studies and a Master of Divinity from Holy Cross Greek Orthodox School of Theology (2015).

Saint Demetrios Cathedral was his first assignment where he served as an assistant priest. In 2016, he was transferred and elevated to proistamenos to his assignment of Saint Catherine Greek Orthodox Church in Braintree, MA.

Fr. Dionysios and his wife, Maria relocated to their new home on March 1st, 2020 when he was installed by His Eminence Metropolitan Methodios and elevated to the position as the dean of the Dean of the St. George Greek Orthodox Cathedral of Springfield, MA. Every day, the live a happy life where they work together to glorify God with all their hearts.