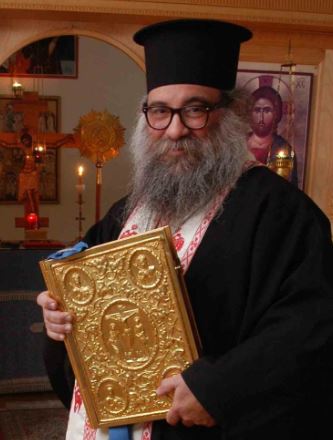 Fr. John Routos was born, raised and has lived in Manchester, NH his whole life.  He is the only child of Constantinos and Christine (Siomos) Routos.  He attended St. George Cathedral and served as an altar boy for many years.  After graduating from Manchester Central High School, he attended Hellenic College.  He married his wife, Presbytera Ann (Brisson) Routos in February 1979 at St. George Cathedral.  He was ordained to the deaconate in the Russian Church Abroad in 1983 and served at the Dormition of the Theotokos Orthodox Church in Concord, NH.  He was ordained priest in 1994 and remained in Concord until 2010.  Fr. John has worked at Cummings Printing Company in Hooksett, NH for 29 years, because the parish he served could not support a full time priest.  Over the last 5 years he has served at St. Peter and Paul Russian Church as assistant priest.  Fr. John began serving at Taxiarchai church as a substitute priest in June 2015 and was assigned permanently to the parish in September 2015.

Fr. John and Presbytera Ann have raised 4 wonderful children, Rebekah, Maria, Martha and Constantine.  They also have two sons-in-law, Michael O'Leary and Robert Makris. They have been blessed with strong family ties and feel fortunate that their children live and work in the Manchester area.

Fr. John is a traditional priest who has a beard and wears a rassa.  He is passionate about reading and believes one of the best ways to learn how to live your faith is by reading the lives of the saints. The liturgical services of the  Orthodox Church are very important to him.  He is a man of prayer, happiest in church, with his family, visiting with members of his church family or when reading! He also loves vintage movies and fountain pens!