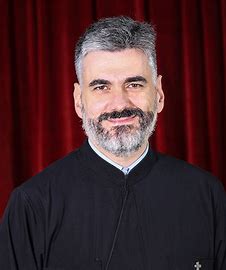 The Rev. Dr. Romanos Karanos was born in Thessaloniki, Greece in 1975. Upon his
graduation from Anatolia College in 1993, he moved to the United States to study at Harvard
University, where he earned a Bachelor of Arts in Government in 1997. From 1997 until 2011,
he worked in the banking industry. In 2004, he earned a Master in Business Administration from
Boston University. From 1998 until 2003, he studied Byzantine Music under Photios Ketsetzis,
Archon Protopsaltis of the Greek Orthodox Archdiocese of America. From 2005 until 2011, he
studied at the National and Kapodistrian University of Athens under the guidance of world-
renowned musicologist Gregorios Stathis. In 2011, he successfully defended his doctoral
dissertation entitled “The Kalophonic Heirmologion” and was awarded a Doctor of Philosophy
degree in Byzantine Musicology.