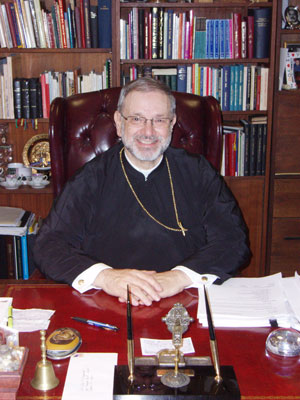 As a young boy, Fr. George Tsoukalas eagerly anticipated Sunday mornings. Serving as an altar boy for the Church was a privilege and the spiritual beauty of the Divine Liturgy captivated him—he immediately felt at home in the Church.

Life in Lowell, Massachusetts was challenging in the Diaspora, including Fr. George’s family. Most families worked hard in local factories, lived in the triple-deckers that characterized communities with an immigrant influx and faced the constant struggle that comes with language barriers.

Yet the presence of four Greek Orthodox Churches in Lowell united Greek families and was testament to the strength of its community. Fr. George visited each of these Church’s growing up and carefully observed Church traditions. Attending Holy Trinity Greek-American Parochial School was critical in his education and provided a strong foundation for his faith He immersed himself into every facet of Orthodoxy, cultivating his faith at early age. Upon graduation from Lowell High School, he began his studies at the Holy Cross Greek Orthodox School of Theology.

1966 proved to be a defining moment for Fr. George—he married Francine Thalia Bacas, graduated from Holy Cross, was ordained to the Holy Diaconate by Metropolitan Iakovos of Philadelphia, Asia Minor and was ordained to Holy Priesthood by Archbishop Iakovos.

And thus began the journey of Fr. George’s Ministry.

He was welcomed to St. Vasilios Church in Peabody as an assistant priest. In Nashua NH, he was instrumental in uniting the Annunciation and St. Nicholas, which led to the establishment of the St. Philip Greek Orthodox Church. He dedicated fifteen years to the Annunciation Greek Orthodox Church in Woburn, until he was named Director of Diocesan Ministries in 1987. After two years in Jamaica, New York he returned to Massachusetts, serving as a pastor at the Holy Apostles, Sts. Peter and Paul, in Haverhill.

When Fr. George arrived to the St. George Greek Orthodox Church on January 1, 1997, it was “a dream come true”. He immediately noted the magnificence of the St. George community and was impressed with the tremendous generosity of the parish. Since his installation, many new programs have since been initiated, as well as the reorganization of existing programs, for the benefit and spiritual growth of the parish family.

When entering Fr. George’s office, you often see him gazing at the photograph of his grandchildren Charles, Victoria and Juliana, who affectionately call him “Papi”. He is the father of three children—Stephanie, Michael and Daniel and is experiencing the joy of watching his family grow. “Without Family,” Fr. George says, “we are nothing”.

Fr. George has noted that the legacy of the St. George Greek Orthodox Church is firmly rooted in the community because of the perseverance of its founders in 1905, the continued dedication of the Greek community and the presence of a dynamic church family—the Clergy, the Parish Council, the Philoptochos, the Ladies Society, the PTA, the Forever Young, the Church and Greek Schools, the Choir and Cantors, the altar boys, Church personnel and most importantly the youth, the future leaders of the Church.

It is not one individual who shapes our church, Fr. George has said. Rather, St. George has flourished because of the many individuals who work hard to sustain and meet the needs of our 800 family parish. We are here to secure that the torch will be passed to new generations and that the light of our faith will continue to shine brightly.