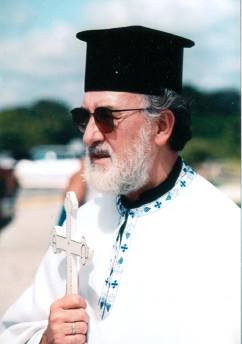 Fr. Charles J. Simones was born January 30, 1932 in Lewiston, ME. He was raised in Lewiston's Twin-City of Auburn, ME. He is the son of the late Demetrios and Alice Lambrew Simones. He graduated from Edward Little High School in Auburn, ME on June 13, 1951.  He graduated from Hellenic College/Holy Cross School of Theology on June 1, 1958 with a Bachelor of Arts degree in Theology. Shortly thereafter, on September 28, 1958, he married Joan T. Canacaris of Bath, ME. The marriage took place at Holy Trinity Greek Orthodox Church in Portland, ME. The sacrament of Holy Matrimony was performed by Bishop Gerasimos of blessed memory, assisted by Fr. George Venetos of blessed memory, and Fr. George Karahalios.

After his ordinations, Fr. Simones was assigned to serve as the first priest ever as pastor of the mission parish of the Annunciation Greek Orthodox Church in Quebec City, Quebec, Canada.   Fr. Simones arrived at his new assignment on December 5, 1958. During the first two years of Fr. Simones' ministry in Quebec City, he was forced to perform the Divine Liturgy in a rented theater. At the end of his second year in Quebec City, the parish purchased a large building at 17 St. Cyrille Street East that was converted into a beautiful Orthodox House of Worship. It is dedicated to the Annunciation of the Theotokos.

Father Charles and Presvytera Joan were blessed with their first child, Gregory, born in Quebec City on August 15, 1961. Shortly thereafter, Father Charles was assigned to St. Sophia Hellenic Orthodox Church in New London, CT where he was the priest until October 8, 2006. On his 32nd birthday, January 30, 1964, a second son, Thomas, (Athanasios), was born in New London, CT. Gregory received his undergraduate degree from Skidmore College in Saratoga Springs, NY on May 20, 1984. Gregory received his master's degree in hydrogeology from the University of Georgia in August, 1990. He is currently employed with an environmental company in Colchester, CT. Thomas C. Simones attended Hellenic College in Brookline, MA for two years. He transferred to Connecticut College in New London, CT from which he received his undergraduate degree. He received his J.D. degree from the University Of Connecticut School Of Law. He is married to the former Katina Spanos and they have three sons. He practices law in Waterford, CT.

Fr. Charles was honored with the title Sakellarios on April 16, 1967 in Lewiston, ME and was named a Protopresvyteros by the Ecumenical Patriarch Athenagoras on May 5, 1983. He has served as secretary of the alumni association of Hellenic College/Holy Cross School of Theology. He was a member of the New England Diocesan Committee. He served on the executive committee of the New London Kiwanis Club. He served as president of the New London Clergy Association. He served on the Citizens Advisory Committee of the City of New London and as Treasurer of the New England Clergy Brotherhood of the Metropolis of Boston. He received his Master of Arts degree in Education from Trinity College in Hartford, CT on June 5, 1972.

On October 8, 2006, the parishioners and friends of Father Charles J. Simones honored him for his forty-five years of dedication to the parish of St. Sophia and forty-eight years in the Greek Orthodox priesthood. He now lives in retirement with his wife in Waterford, CT and assists the new priest at Saint Sophia Hellenic Orthodox Church. He also produces a TV program entitled "The Voice of Orthodox in Southeastern Connecticut" channel 25 on the local Public Access Channel.