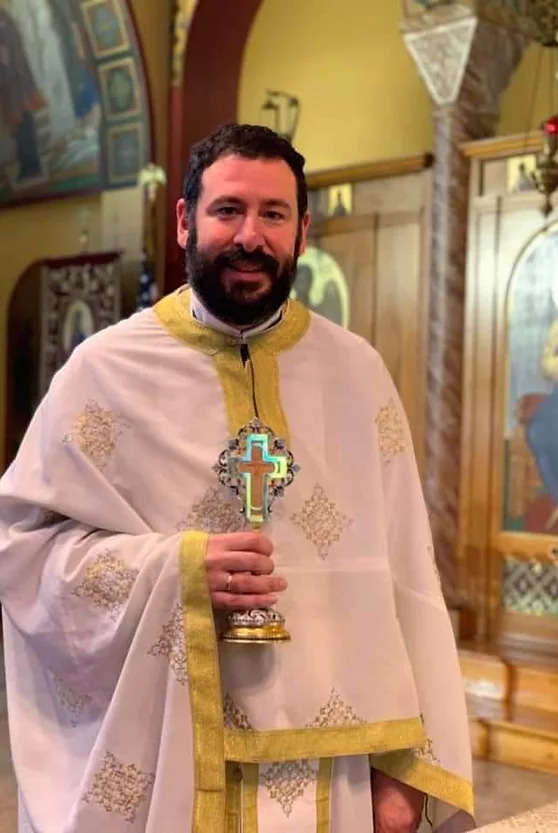 Father Peter (Πέτρος) grew up in Rockland County, New York about 25 miles from New York City and loved the Church from childhood.  He went to the State University of New York at Albany, where he studied Spanish, linguistics, and teaching.  He taught Spanish at secondary public schools in for seven years.  During that time, he married Presvytera Athanasia.  He then attended Holy Cross Greek Orthodox School of Theology from 2009 to 2013, graduating with the Master of Divinity.  He was ordained to the Deaconate in West Nyack, New York, on September 29, 2013. Father Peter began serving Holy Trinity in Dallas on November 1, 2013, and was ordained to the Priesthood in this parish on January 5, 2014.  He began serving at Saint Sophia's on September 12, 2021.

Father Peter's appreciation for language and teaching has played a role his enthusiasm for the scriptures and ministry.  He grew up in the sacred services of the church and emphasizes that the services are the center of life.  They are the way we as a community experience awe at the love of God, receive contact with holiness, and receive true direction for everything.   The sacramental life should be pursued with fervor and cultivated through confession and frequent participation in the services, either through attendance or through pastoral visits to any who are unable to come to the services.