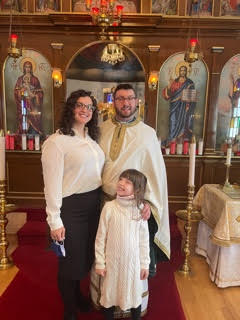 Fr. Philip Halikias was born and raised on Long Island, New York. Fr. Philip grew up in an Orthodox-Catholic home, being received fully into the Orthodox church at 17. He attended the Kimisis of the Hamptons parish prior to living with his family in Brookly, wherein he attended his father’s home parish of Three Hierarchs. Fr. Philip graduated from St. Joseph’s College Brooklyn in 2013 with a B.A in Religious and Philosophy, with minors in Psychology and Literature. He married Presvytera Christine in 2013, and moved to Holy Cross Greek Orthodox School of Theology in August, 2014. Fr. Philip and Presvytera welcomed their daughter Maria into the world in November, 2014. Fr. Philip and his family began attending St. Nicholas Church as a seminary family in 2017. Fr. Philip graduated from his M.Div program with honors in 2018. He and his family continued coming while Fr. Philip worked with the seminary and archdiocese part-time, until his ordination to the Holy Diaconate by Metropolitan Methodios on July 27th, 2019 at the Metropolis of Boston Camp in Contoocook, NH. Fr. Philip was assigned to the Taxiarchae Greek Orthodox Church in Watertown, MA.

Fr. Philip was ordained to the Holy Priesthood on September 14th, 2019, by Archbishop Elpidophoros at the Holy Cross Chapel in Brookline, MA.

Fr. Philip graduated from Boston University with his Doctor of Ministry degree in January 2021, wherein his dissertation focused on the Home Church of Orthodox and Catholic couples, and developed a support group to promote their life in the church. He was assigned and began at St. Nicholas Church on March 14th, 2021, as parish priest.

Fr. Philip works full time at Holy Cross Greek Orthodox School of Theology as the coordinator for the Office of Equity and Compliance. Fr. Philip also serves on the National Council of Churches Faith and Order Commission.