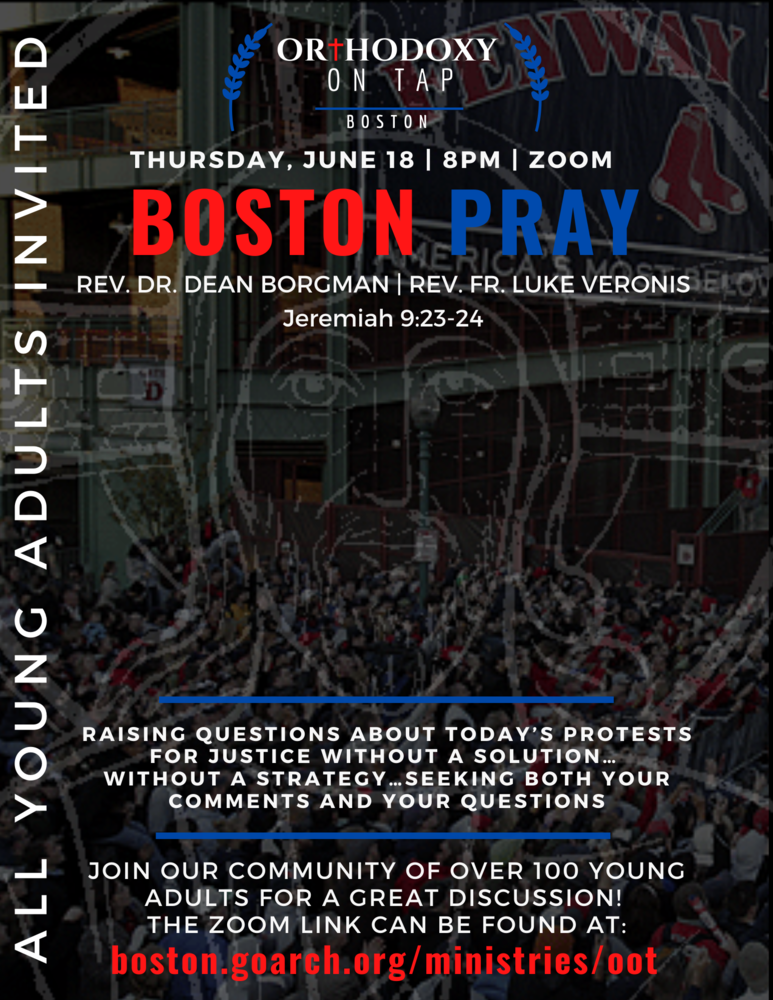 JOIN BY CLICKING HERE AT 8PM ON THURSDAY

READ, WATCH, OR LISTEN TO THIS SERMON AS A PRIMER TO TOMORROW'S CONVERSATION

We see such terrible extremism today, and the psychology of ideological extremists is the same, whether on the far right or the far left. Extremists on the far left try to portray ALL police officers as evil and corrupt and we have to get rid of them all. The extremists on the far right try to portray ALL protesters as violent anarchists who want to destroy our country. This is a false dichotomy. Are all police officers bad? Absolutely not. Are all protesters violent? Absolutely not. Both statements are so ridiculous, and yet extremists on both sides keep shouting and yelling their position, and unfortunately, their dangerous repetition makes too many people believe their distortions.

We can see so many examples of this every day in the news and on social media. Yesterday, I read about the class president of a high school who was seen on snapchat burning a thin blue line (i.e. police) American flag and yelling ““All cops, if there is such thing as a good cop, which I don’t think there is, should quit. The only good cop that’s still employed is a dead cop” Now I’m sure this class president is a smart and respectful high school kid. She probably was with her friends at a bonfire and thought she was just joking around, but this is a perfect example of seeing the influence of this extremism all around us. What leads a typical, good young high school kid, a class president, to say such deplorable words in a careless moment? I feel sorry for this young student, because I can see other young high school kids doing or saying something exactly the same, something stupid like that in a careless moment.

It’s a powerful example of the dangerous rhetoric of extremism we see every day in the news and on social media, and its influencing too many people. We all must beware ourselves of not giving in to this spirit, and of course we need to warn our kids and one another of this danger.

Yet, the extreme right is no better. In fact, they express a similar psychology. The extreme right tries to portray all the protesters these past weeks as violent anarchists, people who want to destroy our country and trample upon all that we value and consider good. These extremists of the right ignore or turn a blind eye to the millions of peaceful protesters, trying to portray all protesters as lawless fanatics who commit violence, destruction and even murder. This simplistic and dangerous caricature allows such extremists to ignore the pleas for empathy, understanding and compassion towards those who have suffered injustices and they reject any sincere self-reflection into the systemic injustices within our society.

The extreme left. The extreme right. Both ideological extremes are terribly dangerous and need to be rejected. Life should never be defined by these extremes. Such simplistic and distorted caricatures of the other – viewing those on the left or right in extreme ways will never offer an honest and complete picture of people. And social media exasperates the situation because so many, including many Christians and even some priests I know, try to pigeonhole all liberals or all conservatives into one, false caricature.

If we are sincerely trying to follow Jesus Christ, however, we must reject all false, simplistic, and dangerous labels that extremists place on one another. We all need to be on guard to not use their terminology, their descriptions, their attitudes, and we must not keep posting their stories. Especially all these conspiracy theories that are floating around on social media, they are the work of ridiculous extremists and we must reject all these forms of extremism!

These forms of extremism from the right and from the left are the work of evil, the work of the devil to divide us from one another. There’s only one form of extremism that is ever acceptable as a Christian, and that is the extremism of love.

During the height of the Civil Rights Movement back in the 1960s, during one of the times that Martin Luther King was imprisoned, many people, including many white clergymen, were calling him an agitator and a dangerous extremist.  Listen to his response: “Though I was initially disappointed at being categorized as an extremist, as I continued to think about the matter I gradually gained a measure of satisfaction from the label. Was not Jesus an extremist for love: "Love your enemies, bless those that curse you, do good to those that hate you, and pray for those who despitefully use you and persecute you." Was not [the Prophet] Amos an extremist for justice: "Let justice roll down like waters and righteousness like an ever flowing stream." Was not Paul an extremist for the Christian gospel: "I bear in my body the marks of the Lord Jesus." … So the question is not whether we will be extremists, but what kind of extremists we will be. Will we be extremists for hate or for love? Will we be extremists for the preservation of injustice or for the extension of justice? In that dramatic scene on Calvary's hill three men were crucified. We must never forget that all three were crucified for the same crime--the crime of extremism. Two were extremists for immorality, and thus fell below their environment. The other, Jesus Christ, was an extremist for love, truth and goodness, and thereby rose above his environment.”

Today, the first Sunday after Pentecost is known as All Saints Sunday – the Sunday we remember all the saints of the Church, those saints officially canonized as well as the many other unknown saints who have not been canonized but whom our Lord knows. This is the first Sunday after remembering how the Holy Spirit came down upon the followers of Jesus and not only enlightened them but empowered and transformed these saints into extremists for God’s love. They became extremists in proclaiming the Good News of their Risen Lord and sharing His unconditional love to all people everywhere! For such saints, there was “no longer Jew nor Greek, slave nor free, male nor female,” because the extreme nature of divine love destroyed all boundaries. That’s the only type of good extremism.

Let me return again to the example of Martin Luther King’s extremism. When his home was bombed and his children were threatened; when he was imprisoned and his friends were murdered; when he faced an uncertain future and knew his life was in danger, he responded to the evil and hatred that surrounded him in this extreme manner. He stated, “I've seen too much hate to want to hate, and every time I see it, I say to myself, hate is too great a burden to bear. Somehow we must be able to stand up against our most bitter opponents and say: We shall match your capacity to inflict suffering by our capacity to endure suffering. We will meet your physical force with soul force. Do to us what you will and we will still love you.... Hate cannot drive out hate. Only love can do that. Hate multiplies hate, and violence multiplies violence in a descending spiral of destruction… Love is the only force capable of transforming an enemy into a friend.”

Today, I want us to reflect on extremism, both the dangerous and evil type of extremism, and valuable and godly type of extremism. The extremism of the political and ideological right and left that we see playing out in our bitterly divided country today is the extremism we must reject. There is nothing good that will come out of that.

The only good extremism is that of the saints. Becoming an extremist for love, for mercy and for compassion. This week, may we all be on guard against the dangerous forms of extremism, and embrace the only acceptable form of extremism in God’s eyes.