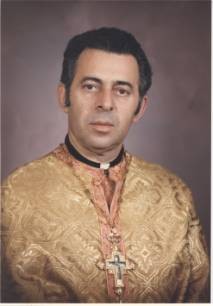 Rev. Dr. Arthur E Athans (Athanasios Athanasiou) of Dover, NH was born in Kimi on the island of Evia, Greece on December 9, 1930, the son of Father Emmanuel and Anna (Karalis) Athans.

He attended Panteion University in Athens, and the University of Toronto, and graduated from Holy Cross Theological Seminary in Brookline with a BA in 1956 and a BD in 1957. In 1962 he received an STM from Boston University, and a PhD in 1992 from Somerset University in England.

Father Athans was ordained a deacon on August 15, 1955 in Somerville, MA and to the priesthood on October 9, 1955 in New London, Conn by Bishop Athenagoras. In 1955 he was assigned to the “Annunciation” in Dover, NH. Within a year, the church burned down and a new church erected. He was also instrumental in building a Hellenic Center, buying picnic grounds and enlarging the church cemetery grounds.

Father Athans has been married to Keta Xanthos of Brooklyn, NY for 52 years. They have two daughters, Geriann, married to Dr. John Athans, and Barbara, married to Les Hoogeveen, four grandchildren and two great granddaughters.

He has been awarded the titles of Sakellarios, Hiermnemon, Economou, and Protopresbyter. Father Athans served on many committees, including the Citizens Advisory Council, Advisory Council on Alcohol Abuse in NH, Treasurer of the Dover Industrial Development Association, and Pharmaceutical Investigatory Committee.

He served as chaplain at the University of New Hampshire for 25 years, and taught for 15 years in the department of Classics at UNH.

Father Athans retired after 40 years service to the “Annunciation” in Dover NH in 1995, and has been serving the neighboring community of “Dormition of the Holy Virgin” in Somersworth, NH on a part time basis.

His greatest joys in retirement are continuing to serve the church, travel, and spending summers at his beach house at York Beach, Maine with his family.