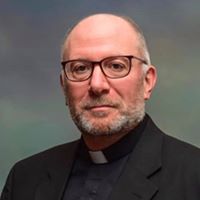 A native of Chicago, Fr. Tony Vrame came to Boston in 1986 to study for the priesthood at Holy Cross Greek Orthodox School of Theology. After graduation in 1989, he's been working for the Church in various capacities: in the Department of Religious Education of the Archdiocese (he's been the Director since 2007); Managing Editor of Holy Cross Orthodox Press (1997-2002), and Director of the Patriarch Athenagoras Orthodox Institute at the Graduate Theological Union in Berkeley, California (2002-2006.). He is on the faculty at Holy Cross Greek Orthodox School of Theology, teaching Religious Education to seminarians. He has also taught at St. Vladimir's Seminary and the Graduate Theological Union. In addition to his M.Div. from Holy Cross, he has degrees from DePaul University, the University of Chicago, and holds a Ph.D. in Religion and Education from Boston College. He is well known both in the US and internationally for his articles and lectures in theology and education. Fr. Tony was ordained to the priesthood in 2016.
Since many people ask, Fr Tony's ancestors emigrated to Chicago from villages near Korca (Kortisa) in today's Albania and Greece (near Tripolis, Arcadia) more than one hundred years ago. Vrame is shortened from Avramopoulos. He loves to cook, go to the symphony, opera, and theater, and study Chicago history. He jokes that he owns way too many books! He has one younger brother, whose family live in Sacramento, CA and his mother in the Chicago suburbs.