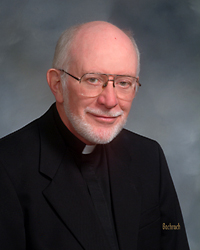 In October of l966, Fr. Demotses was ordained to the priesthood and was assigned to Holy Trinity Church in Bridgeport, CT. After only three months, he was asked to assume the duties of pastor of St. George Church in Norwalk, CT. At the end of that same year, he was transferred to the Diocese of Boston and became pastor of St. Vasilios Church in Peabody, in what was then described as a "short, transitional assignment." That assignment continued for 39 years until his retirement on December 31, 2006.

Fr. Andrew was always active in both church and community affairs. In years past his service has included an appointment as a founding delegate to the National Council of Presbyters of the Greek Orthodox Archdiocese, 12 years of service on the Ecclesiastical Court of the Diocese of Boston, 5 terms as a trustee of Hellenic College / Holy Cross during which he served as a member of the executive committee, a member of the adjunct faculty of Holy Cross, and as the director of its spiritual fathers program.

He is a member of the Yale Club of Boston, the Holy Cross Alumni Association, the New England Clergy Brotherhood, the Peabody Clergy and Ministerial Association and the Massachusetts Horticultural Society. Married to the former Mary Poulos, they are the parents of two sons, James, an attorney and Andrew, the operations manager of Northeast Nursery, and have four grandchildren.

Following his retirement from active parish service, Fr. Andrew has concentrated on the writing and recording of devotional materials for the Archdiocese website.  As a result of this effort the website currently has several hundred of his sermons on the Sunday Gospels, as well as over 500 sermonettes or meditations in both written and recorded formats. These materials are used by priests throughout the country to augment their parish and Sunday worship bulletins, and are featured on the weekly chapel segment of the Archdiocese website.  In addition Fr. Andrew has granted permission, at their request, to the National Conference of Catholic Bishops and the Presbyterian Church of America to use his recorded and written materials.