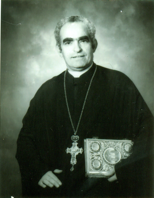 Father Soterios Alexopoulos was born in the village of Kerasea, near Karditsa, in Thessaly, Greece. After his grammar school studies in Kerasea, and graduation from high school in Thessaloniki, he served in the Greek Army in the Communications Department for two years. He then immigrated to the United States as a student in 1956.

In 1964, Father Soterios married the former Eleni Chronopoulos of Boston, a graduate of the college division of St. Basil's Academy. Father was then ordained as a Deacon in August 1964 at St. Demetrios in Fall River, Massachusetts, and then as a Priest in September of the same year at St. George in Manchester, New Hampshire by Bishop Gerasimos.

Father Soterios was assigned by His Eminence Archbishop Iakovos to the Holy Trinity Greek Orthodox Church in Lewiston, Maine in October 1964. One of his first duties was to reorganize the Greek and Sunday Schools, with Presvytera Eleni, who also directed both schools. A new choir was also formed under the direction of Presvytera. Father Soterios also organized the GOYA and the Ladies' Philoptochos Society.

In 1967, Holy Trinity was honored to host His Eminence at the celebration of its 50th Anniversary. His Eminence bestowed upon Father Soterios the offikion of Father Confessor. In 1968, Father Soterios and Presvytera Eleni visited the Ecumenical Patriarchate and Father was honored by the late Patriarch Athenagoras with the medal of Saint Andrew. During his time at Holy Trinity, Father Soterios was an instructor and examiner of the Greek language at Bates College, served as Chaplain at Tongus Veterans Hospital, and served on the Maine Governor's Council of the Alliance and the Elderly. He organized the Building Fund Drive for the new church that was later built. In 1973, he received his Master's Degree from the New York Theological School.

In March 1973, Father Soterios was reassigned to st. Philip Greek Orthodox Church in Nashua, New Hampshire. Under his spiritual guidance, a new Byzantine Church and Community Center were built in Nashua. In 1974, His Eminence visited the new church of St. Philip and bestowed upon Father the offikion of Sake lion. Father and Presvytera reorganized the youth of the community, along with organizing the Ladies Society AGAPE. Presvytera Eleni also directed the Greek School, the Sunday School, the junior choir and the Greek Dancing Group. During his time in Nashua, Father served on the Board of Directors of the New England Clergy Brotherhood as secretary, and was elected by the New England clergy to serve on the Archdiocesan Presvyters Council, an advisory board to His Eminence, for a four year term.

His Grace Bishop Anthimos of Boston appointed Father Soterios to the newly established Diocesan Council and charged him to be the Chairman of the Interfaith Commission in 1979. During the Consecration of St. Philip in 1982, His Eminence bestowed upon Father Soterios the offikion of Economos. His Eminence presented Father with a gold cross on behalf of the community for his devotion and service to the parishioners of Nashua. In 1987, His Eminence Archbishop Iakovos bestowed upon Father Soterios the offikion of Protopresvyter of the Ecumenical Throne for his devout service to the community.

While in Nashua, Father Soterios was an active member of the Council of Churches in Nashua, along with serving on the Mayor's Council of Elderly Affairs. He was the treasurer of the Holy Cross Greek Theological School Alumni Association. He was a member of the Spiritual Court of the Diocese, as well as a member of the Commission of the Greek Education, Diocese of Boston. After serving for 21 years, Father Soterios retired from the active duties of St. Philip Greek Orthodox Church in 1994. The community honored him and Presvytera with a testimonial dinner, attended by over 400 parishioners, family and friends.

Since 1995, Father Soterios has been serving St. Nicholas Greek Orthodox Church in Clinton, Mass. Father and Presvytera have two daughters; Vasiliki, and her husband James Christopoulos, and their daughter Maria, who live in Grand Rapids, Michigan; and Tina, and her husband Alexander Miris, and their son Athanasios, and twin babies Sotirios and Christos, who live in Nashua, New Hampshire.